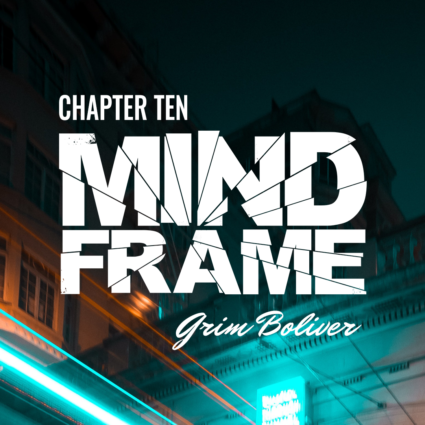 – The whip and sting of Poseidon’s cold barbs pulled Grim from his philosophic musings, straight down the bottom of Maslow’s pyramid. He was cold and needed shelter. His face burned and fingers had gone from feeling that his whiskey glass was cold to not feeling the glass at all. Grim dumped the last of the scotch over the railing of the balcony. As if on que, horns joined the voices and strings in The Requiem as his drink joined the sea mist, two elemental forces marrying and sweeping over the lavish patios of Prospect.

In Chapter 10 of the ongoing tale of Mindframe, we return to the life of Grim Boliver, member of the Fifth House. As his niece, Elise, pokes holes at his belief in WorldGov, he begins to feel what is wrong about the true democracy and seemingly perfect financial system that the world had taken on together. Why is he unhappy when he is one of the wealthiest men on the planet? What does his niece do to manipulate him this time? What does a drive through the sprawling freeways of a rebuilt, alien Los Angeles make him think? What is his daily life like in the economic hub and smart mansion called Prospect? Listen to Chapter 10 to see how Grim’s life ties to other chapter in rather surprising (if not subtle…) ways.