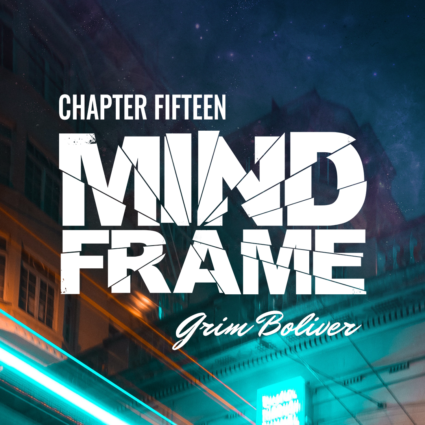 As Grim approached The Plaza, the sky grew alive with electricity. Arcs of silent lightning and pure blue-white energy cascaded to and from a central point in the sky above the shopping center. The Mò Yú had powered up. A Mò Yú’s energy would tear cars and homes and people in half if so directed, the lightning turning into a thousand whips that could melt glass and slice through an engine block…Seeing one powered up was rare and disturbingly beautiful.

Welcome to Chapter 15 of Mindframe. After his niece Elise manipulated Grim, he finally decided he needed to go to his brother Yale and procure an academy permit for Sophia Arnez. In so doing, Grim has to survive several things: a party in Yale’s ballroom, a squad of activated World Police, overly-eager book dealers, and his longing to speak to the art dealer named Penny. Which one will prove more dangerous? Listen and decide!