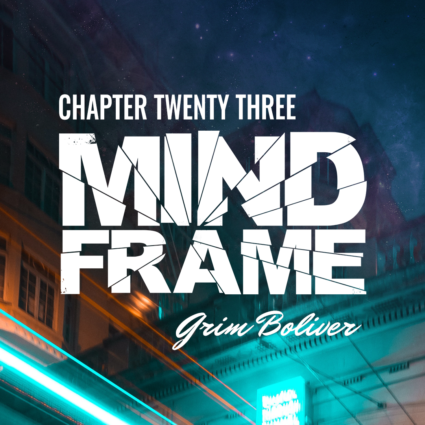 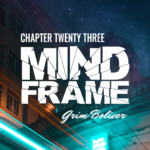 Penny touched Grim’s stomach, danced her fingertips to the burn scars from when the Maglici family had him in chains, hit him with electricity, and put cigars out on his flesh. She slunk behind him, her hands touching each of the other scars that blossomed on his back, from where he was whipped at that same torture session. She gently soothed the marks from his stab wounds in his side, the shot gun pellets in his leg, and even the larger scar where he was shot with a pistol while he was a wilder, younger man. She tracked a single line, a constellation of pain, injury, duty, and folly, until she was in front of him again. She lightly grabbed his fingers and walked toward the bed.

In Chapter 23 of Mindframe, we revisit Grim Boliver. He had just accidentally attended a Deviant rally with Penny, and they ran from the scene before anyone got busted by the Global Police Force. Now that they are free and finally together, they make a very interesting stop at the Plaza which leads them to even cozier environments. As Grim and Penny grow closer, the nagging specter of both the Boliver family’s nature and obligations starts to intrude in very interesting ways…